Vox published a video on the risk some economically disadvantaged Americans take when walking in certain cities and States.

Similarly, this happens in other places across our great country.

Suffice it to say, there’s absolutely no shortage of work for the lawyers. Same could be said about people who support the Executive branch and Legislative branches of governments too.

Concerns about Police brutality are soaring.

People are increasingly searching for expertise on how to handle civil rights violations.

Americans are more concerned about Discrimination.

Of greater interest to pH14 Plan, is the economic impact of potentially rising levels of discrimination.

While unemployment is allegedly at historic lows, an unemployment gap remains and is visible when stratified by race.

Governments, big businesses, and wealthy families distribute that cash by making loans and investments into human resources, for various services and products they sell.

Are black Americans being blocked from being able to sell their services and products to governments, big businesses, and wealthy families?

Is racism limited to the sphere of police brutality, or is police brutality a mere symptom of an underlying culture of racism that can be evidenced more broadly in less confrontational ways?

Our thesis is that to have employment discrimination, there only would need to be two components:  a source of funding and a disparaged applicant who is ‘different’ from the people who control the economic opportunity.

First, where are there higher proportions of black American people in the United States?

We can quickly see that Mississippi, Louisiana, and Georgia have more black people heavily concentrated in their States. Yes, we’re using searches for “luther vandross” as a crude indicator for where there is a higher proportion of black Americans. It correlates fairly well with the Census Bureau’s data.

But those top 3 States don’t have the volume of dollars being invested into hiring people.

Notably, the DC area is ranked in spot #4 and #5 on our list of States that have the highest proportion of black Americans.

Of all the areas across the country that have the largest number of top paying job opportunities, the DC area also ranks high on the list, making it RIPE for potential employment discrimination. 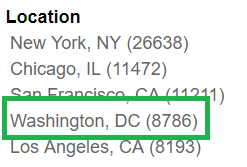 While employment discrimination concerns haven’t risen significantly across the country, those concerns remain the highest in DC and Maryland…. where there is a higher proportion of black Americans AND top paying job opportunities (from gov’ts, big businesses, and wealthy families).

Again, we forecast and hypothesize that for there to be employment discrimination, there must only be a high proportion of black American applicants, and a high concentration of dollars being invested by non-black people (in gov’ts, big businesses, and wealthy families).

DC and Maryland has the highest proportion of black American families AND is among top regions of the country with the highest volume of money is being spent on hiring people… thus making the DC/MD area ripe for the potential of economic disparities, and more specifically employment discrimination.

Does our thesis align with the reality? We think so.

Quite literally, DC and Maryland rank in the top 3 States for employment discrimination concerns.

(Credit to Google Trends, for the free tool.)

If you live and work in the DC area, you may be familiar with the hardship of attaining funding for your work…

Notably, Maryland, Missouri, and Wisconsin – the States with highest employment discrimination concerns per Google searches – have recently had race riots, which is only a symptom of an underlying culture of race-based discrimination. Those riots took place in response to Freddie Gray who lived in Maryland, and Michael Brown who lived in Missouri.

Fortunately, in response to the civil unrest that is directly tied to economic development (or lack thereof) and potential employment discrimination, policy makers may be hinting at a solution.

To include some anecdotal evidence… several of our Uber drivers are actually black scientists.

One of our Uber drivers literally may have discovered the gene responsible for walking. In his genetic engineered ‘knock-out’ model, rodents lose the ability to walk. Therapeutics targeting the gene could have a role in a multitude of diseases. He informed us that he recently moved to the DC area in search for employment after being fired from a top ranked State known for employment discrimination searches that also coincidentally recently reduced the punishments associated with racial discrimination.

Again: A scientist who may have discovered the gene responsible for walking, is driving people around for ‘tips’ on Uber after moving to the DC area in search for employment, only to discover that economic opportunities may be worse for him in the DC area.

Under the pH14 Plan, we don’t have any quick fixes.

Our ONLY two solutions:

1 – Work any job – walk behind a broom if you have to. Yes, it is unfortunate that there’s potentially an alarming proportion of black American professionals are relegated to manual labor roles for income. But don’t let that stop you from earning ANY income possible.

That said, it is frightening that amidst the abundance of statistics illustrating racial discrimination, a report was published in August 2017 by a federal agency on what the report admits is a “rare” issue of six (6) rogue criminals who illegally sought revenge for racial injustices.

We agree that there’s always going to be a small probability for some dummy knuckleheads to contemplate an illegal retaliation scheme for injustices. However, it would seem that the most effective response to potential for revenge is to find a solution to the underlying problems.

There is no immediate solution to racism. Instead, the charts in this article show that the trends of racism and civil rights offenses are escalating. A recommendation could be for the various federal agencies to prioritize reporting on and targeting the emerging alarming and potentially prevalent concerns as identified by this article: particularly the potential for employment discrimination in Maryland, DC, and Missouri.

Beyond that, the only solution for which we have advocated over the years supported by the data we’ve presented, is to increase the number of people being funded to use their skills.  Employment is not only an insurance policy against illegal racism WHEN it inevitably happens, but may also be an effective preventative measure of black-on-black violence BEFORE it happens.

If you are in government, you are an executive in a big business, or you are a HNW family, consider how you can use your access to financial assets to get more low income+ low wealth people funded to use their skills, particularly if they present affordable proposals to work in support of your mission and values.  People who are working to feed their families don’t riot, have fewer negative run-ins with LEO’s, they use illegal and abuse prescribed drugs less frequently, and  certainly aren’t premeditating any types of retaliatory violence.

In pH14 Plan, we’re learning and teaching about various investments, based upon our observation of the facts that we have in hand. We are not forecasting nor predicting the future. We are merely recognizing and acknowledging the data, as displayed in charts, that reveal breakouts and breakdowns in trends.

As investors and historians, we can determine where it has been more advantageous to invest both our TIME AND MONEY in the past, and use those lessons to help inform future investment decisions.

We advocate for a larger national economic development program, and you are warmly invited to learn about this program.